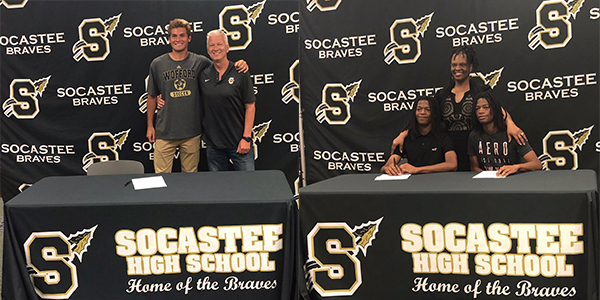 High school seniors officially sign their letter of intent with a collegiate program each year on the first Wednesday in February. National Signing Day is a moment that players will never forget because most have been working since age five or six in order to get there. Signing to play college soccer is an amazing accomplishment that requires talent, dedication and commitment. On an average year Coast FA will have between two to ten players reach their goal of playing at the next level. These players fulfilled their dream today and will forever add their name to the Coast FA collegiate and professional players that came before them seen below.

Jahmar & Jahmier Watson - Coast 99 Red – Socastee High School - Committed to University of South Carolina Sumter in Sumter, South Carolina. The Fire Ants compiled a 6-13-0 record last season and compete in the Carolinas Junior College Conference . “ I have known these two since they were six or seven years old and they have played for Coast FA all of their life.. It is wonderful to see them get a chance to play in college and it is due to their dedication to the game. We can now watch from afar with pride as they progress in the collegiate soccer system “ said Coast Director of Coaching Ross Morgan..(Click for Photo)

John Cetin – Coast 99 Red – Socastee High School – Committed to Wofford College in Spartanburg, South Carolina. The Terriers were 5-11-1 last season in the Sothern Conference.” It has been a pleasure having John in the Coast FA system for many seasons and seeing his game get better each year. John had a lot of success in goal with a very strong 99 Red side. He benefitted greatly during the summers working against older players on our PDL team. John is totally prepared to be successful in D1 college soccer” said Coach Morgan..(Click for Photo)