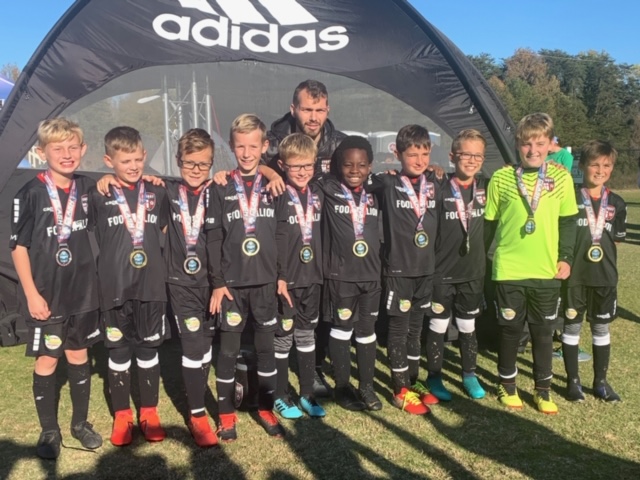 Coast FA teams battled wintery conditions and returned home from the Adidas Clash in Greensboro, North Carolina with a fistful of medals. Three championships and two finalist trophies were captured during the last tournament of the fall season. “We are pleased with the progress that our teams have made since the start of the fall and are looking forward to the Super Cup next month for our U15 – U19 teams “ said Coast Director of Coaching Ross Morgan.

The Coast 10 Red (click for image) coached by Endri Mince captured the U10 championship. “ I am very proud of the boys performance this weekend. This game is as much about mental strength as it is about physical strength and execution. We started off slow in Saturday’s matches but the boys had the mental fortitude to raise their level for the semi final and championship matches. All in all it was a wonderful experience for everyone involved and the boys were rewarded with a championship medal “ said Coach Mince.

Coach Manny Ardeljan’s Coast 09 Red (click for image) won the championship at U11 with a dominating performance. The boys won four consecutive matches against very good competition along the way. “ The future is bright for this age group and I am so proud of their hard work. Greensboro hosted an excellent tournament and my players benefitted from their competitive bracket “ said Coach Ardeljan.

The Coast 08 Black North team (click for image) claimed top honors in the U12 division. Coach James Pallassino said “ We played well during our two Saturday pool matches only conceding two goals and creating multiple scoring opportunities. Our semi final match went to kicks from the mark and our championship match required us to come from behind to win the division. All of my players gave a great effort this weekend to help win the championship.”

The Coast 11 Black (click for image) and Coast 01 Red finished as finalist after coming up just short in the championship matches.