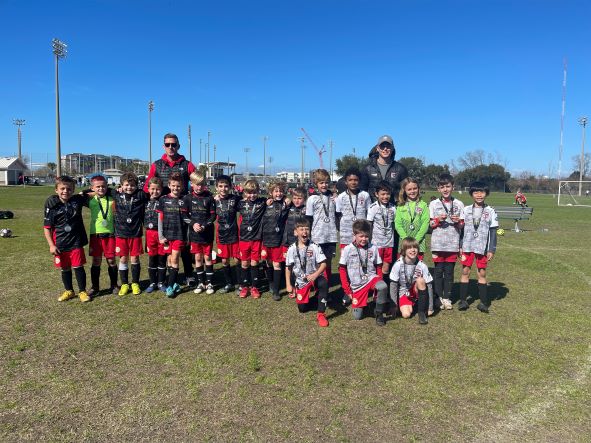 Coast FA qualified for championship matches at Boys U9, U10, U11, U13 and U14 divisions in the Charleston Cup hosted by Surf Soccer Club over the weekend. The boys came home with two champion and three finalist medals for their efforts. After losing several fields, hats off to the Surf staff for making adjustments to their schedule to get all of the matches completed.

The U10 top division saw Coach Conner Norton Baker’s Coast 12 (Click for Image) Red defeat Coach Joel Banta’s Coast 13 (Click for Image) Red 3-0 in the final. The 12 Red had another stellar weekend of soccer winning four straight matches while scoring seventeen goals and conceding only two. The boys won both of their preseason tournaments this spring with a powerful scoring attack and a stout defense. The 13 Red overcame one loss in pool play to earn their place in the final against their club mates. Coach Banta’s side turned in a gritty effort, but the 12 Red were too powerful in the end. “ The boys put together another outstanding weekend of soccer. The champion medals are a testament to their hard work during training” said Coach Norton Baker. Coach Banta added “ I really enjoyed working with the 13 Red this weekend. I am very proud of them for playing up an age group and reaching the finals. This team has great potential and I look forward to working with them again.”

Coach Alek Ljubicic’s Coast 11 Red (Click for Image) grinded out two wins and a tie in pool play to set up a dramatic final versus Raleigh based Carolina Velocity . For the second straight tournament the boys fell just short and brought home finalist honors. “ In a game like this, we create leaders, team philosophy and character of the team and individual character. The most important thing is we learn who we are “ said Coach Ljubicic.

The U14 division saw Coach Ross Morgan and his Coast 08 Red (Click for Image) team win three consecutive matches before coming up short 1-2 in the final versus CESA Black. “ We had a productive weekend of soccer. Although not the final result we were hoping for we played well in all four matches. The work being done in training is starting to appear on the field which is very encouraging from a coach’s standpoint” said Coach Morgan.

The Coast 10 Red (Click for Image) and Coach RJ Bass avenged a 1-4 loss in pool play to NCFC Red South by shutting them out 2-0 in the championship match. Coach Bass said “ we expected a difficult weekend with five of our players unavailable for this tournament. The changes were felt in our first match however the boys adapted well and won their way into the final. I got a complete team effort from my side this weekend. To a man, they raised their level to make this happen.”