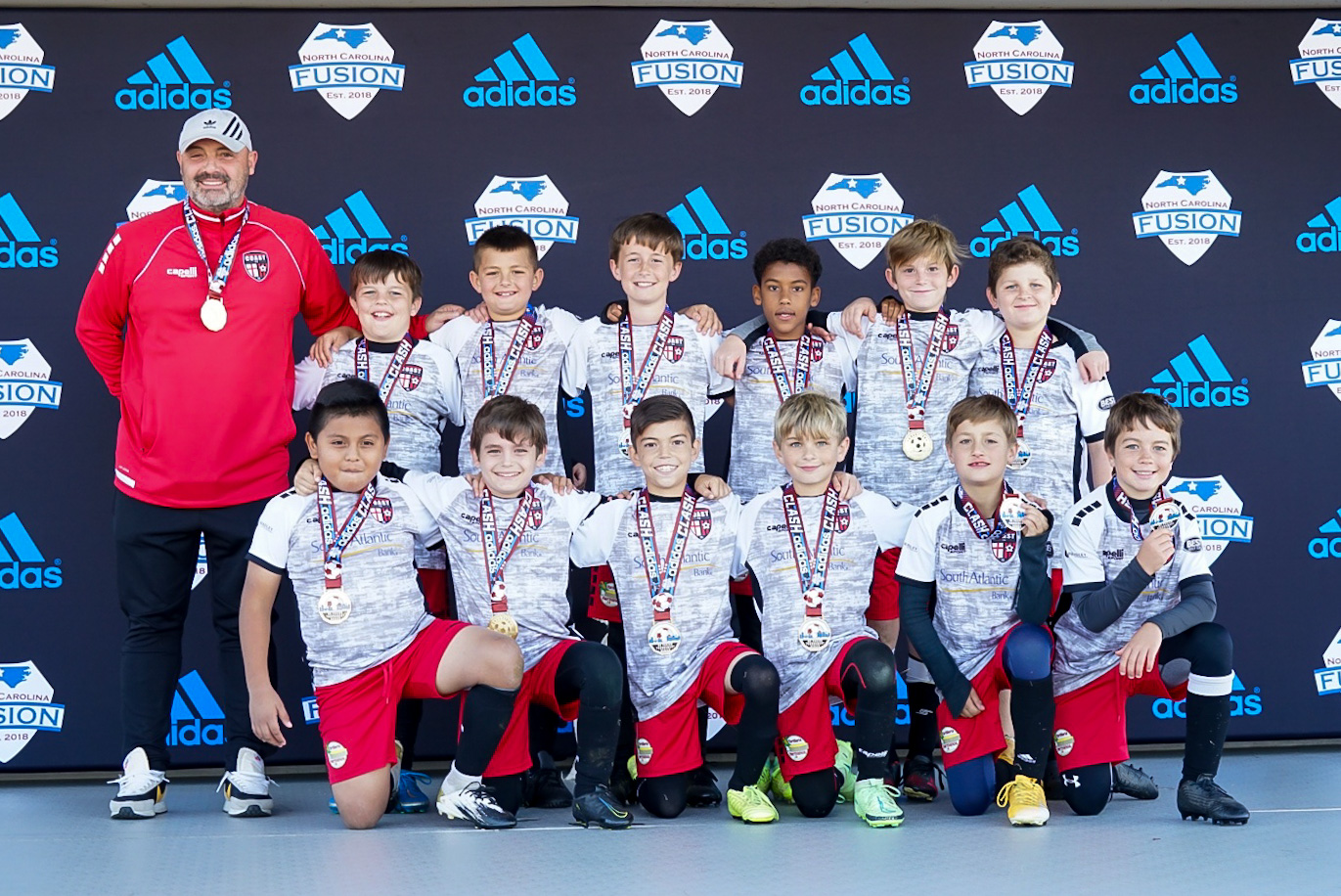 Coast FA teams returned to the beach with two championship and four finalist medals from Greensboro over the weekend. The Adidas Clash hosted Coast FA among three hundred fifty teams from six states at beautiful Bryan Park. “The guys that run the NC Fusion do a tremendous job putting on the Adidas Clash every year. The facilities are first class and they put a lot of time and effort into the event. The brackets were very consistent throughout the tournament and the referee coverage was also impressive during this national referee shortage that youth soccer is experiencing ” said Coast Director of Coaching Ross Morgan.

Coast 11 Red - The boys won the U11 Silver Division championship match in dramatic fashion over Virginia based Legacy FC in extra time kicks from the mark. Impressive shutouts on Saturday over NC Fusion and Charlotte Soccer Academy plus a hard fought draw with Cleveland County Sunday morning saw the team through to the final.

Coast 10g Red – After posting three consecutive shutouts during pool play the girls won a hard fought 3-2 result over FC Athletico to win the U12 Silver Division championship. Coach Mary Vollink said “ What a way to finish off this awesome fall season. I am so proud of these girls and the work they have put in to reach this point. The last of our three preseason goals was met by winning the championship in Greensboro. They deserve this success, and I am excited to see them continue to grow next spring.”

Coast 09 Red – The boys also posted three consecutive victories during pool play but dropped a 0-1 heartbreaker in pk’s during the U13 Gold Division final to a very good Bulls SC side. “ A bittersweet ending to an otherwise awesome fall season for my guys. To come up short in pk’s during the championship was unfortunate but just another building block to learn from ” said Coach Mark Vollink.

Coast 12 Black – Coach Rob Bramble’s team took a major step forward by finishing as finalists in the U10 Copper Division. “ The boys started the tournament very strong with two wins on Saturday thanks to every player having a strong work ethic and playing hard. Even though we came up short in the final 1-3 my players are now seeing the benefit of coming to training regularly to become better soccer players “ said Coach Bramble.

Coast 13 Red – Finished as finalists in the U9 Gold Division after dropping a 1-3 result to a terrific BA Charlotte team. Coach Nicole Griffith said “ We had four very competitive matches in Greensboro and our goal keeping play was exceptional. I saw the players implement skills that we have been working on in training sessions which was very encouraging.”

Coast 12 Red – Three strong results in pool play unfortunately ended with a loss in the U10 Silver Division to host club NC Alianza Lima. The team scored goals in bunches over the weekend but did not have enough left in the tank to win their final.

Great weekend for our club !