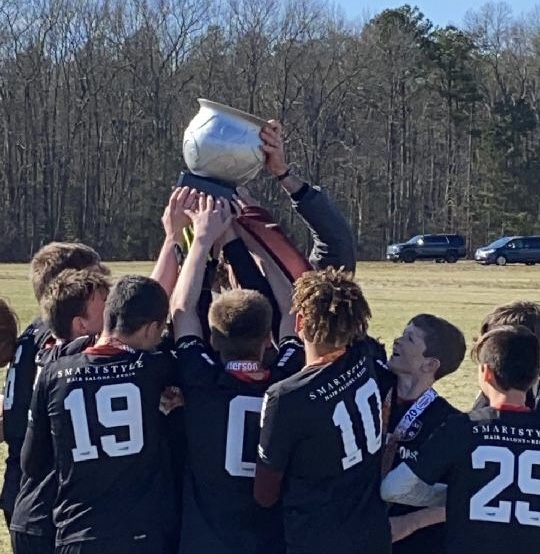 Coach Joel Banta and his Coast 07 Red boys just continue to impress. One week after a stinging 0-1 setback to Surf NPL on their home pitch the boys regrouped and headed north for the Jefferson Cup in Richmond Virginia. They returned home with the U14 championship trophy against very good competition. The Jefferson Cup is widely recognized as one of the top five tournaments in North America along with the Dallas Cup, San Diego Surf Cup, WAGS and the Disney College Showcase. Teams enter from all over the United States and just getting accepted into the tournament is an accomplishment, must less winning your division. The 07 Red is a very tight knit group of players that all reside in Horry and Georgetown Counties and attend many different public and private schools in our area. They come together for training during the week and then play teams from major metropolitan areas on a weekly basis. Next weekend they are off to Greensboro North Carolina for National League matches versus top shelf teams from Utah, Kentucky and Pennsylvania.

The boys strung together a 2-0-1 record at Jeff Cup in their pool matches against FC Richmond, Tidewater and Sterling before beating Arlington FC 2-1 on kicks from the mark in double overtime. “ This weekend was the 07 Red team’s first appearance at the Jefferson Cup so to come out as champions is a major success for us and our club. We faced a very strong Arlington team in the final that found us tied after regulation and two overtime periods. Our keeper stopped their first attempt which set the tone for our players to come out on top 4-2 to claim top honors. I am very excited for this team as we work towards trying to win a state championship in May. This is a very special group of players and also a dedicated group of parents “ said Coach Banta.