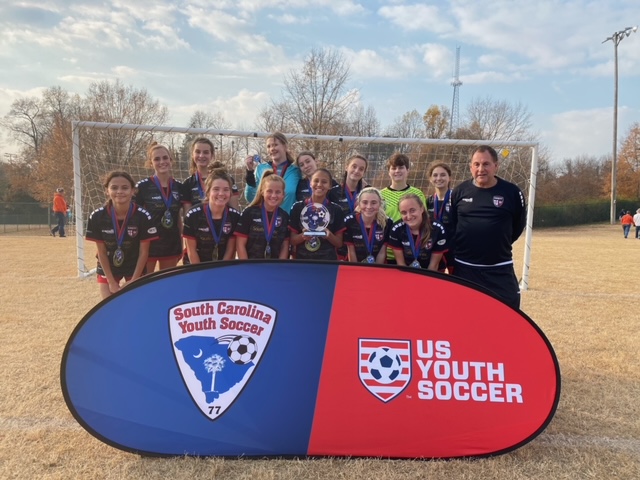 Coach Rob Bramble’s Coast 03g Black team capped off a successful season with an Open Cup championship in Lexington, SC over the weekend. After winning the regular season league title the girls entered the Open Cup with high expectations. Those expectations were realized after posting a 3-0-1 record to claim top honors. Saturday saw two hard fought results during pool play. A 1-0 win over Bulls 03 Black and a 2-1 victory over CESA Tri County Select set the stage for Sunday. A hard fought 1-1 draw against CESA Select was enough to advance the girls to a showdown with United FC for all the marbles. The final match ended 2-0 Coast and the girls made their way to the podium to be crowned Open Cup champions. Coach Bramble said “ Our first three matches were very competitive and well played by both sides. My girls put it all together during our final match against United FC who had played one league above Open in PMSL during the regular season. Tough tackling, quality passing, team camaraderie and a desire to win were all on display. It was a fantastic season for us to win a league title, Open Cup and place as a finalist at the Savannah Showcase. I am extremely proud of these young ladies and very happy at the way they came together as a team.”